Church of the Santissima trinità 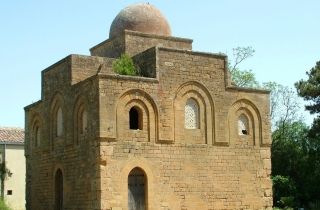 Founded in 1552, it hosted the confraternity of the SS. Trinity and when it became a church in 1615 benefits were granted so that it become economically autonomous. In 1639 he lost the title of parish in favour of the church of San Paolo that affected the area in which the city was developing. Less and less frequented it was abandoned. Among 1746 and 1757 a second church of the SS was built. Trinity exactly opposite the previous one. Remarkable, in the harmonious prospect with steps, the elegant and simple portal.

Among the works we find: perhaps seventeenth-century painting of the SS. Trinità, two other canvases from the early 1900s depicting Maria SS. Ausiliatrice and S.Giovanni Bosco, are the work of the Franciscan nuns of Mary in Rome. The Church of the SS. Trinity was founded in 1552 and entirely rebuilt in the eighteenth century Founded in 1552, it houses the confraternity of the SS. Trinity and when it became a parish in 1615 they were granted benefits so that it was economically autonomous.