The "Scinnute" begins, Eastern is approaching

The Procession of the Mysteries takes place in Trapani from 2.00 pm on Good Friday until about 2.00 pm on Saturday. It is the longest and one of the oldest Italian religious manifestations. Just over a month before the Procession, the "Scinnute" starts, a very old ritual that is worth participating in. 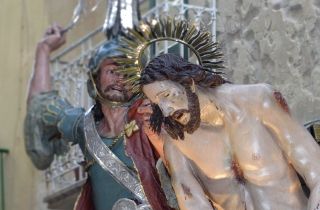 The Procession of the Mysteries takes place in Trapani from 2.00 pm on Good Friday until about 2.00 pm on Saturday. It is the longest and one of the oldest Italian religious manifestations. The Sacred groups of the Mysteries travel in fact most of the streets of the Sicilian city, in a show of lights, sounds, colours and emotions. It is a tradition with evident Spanish origins that has been present for almost 400 years.

The procession is anticipated in the months before the ritual of "Scinnute", which opens the period of the Lent. The celebration of the Scots is rooted in the seventeenth century, when the Holy Groups who were in the church of St. Michael in high niches, came down to be placed in the center of the building and be venerated. The name Scinnute derives from the bottom shift. The Holy Groups, which had increased in number over the years, were kept in chapels equipped with glass, but damaged during the bombings that struck the church, were moved to other churches and placed in the church of the Holy Souls in the Purgatory church. Even today, some of the Holy Groups are moved from the side aisles to the center of the church where the Holy Mass takes place.

This is the 2016 Scinnute calendar:

These the running times for each Scinnuta: